« Buzz Aldrin, Second Man to Walk on the Moon, Is Fighting Back | Main | Roth IRAs Aren’t for Everyone, So Check Your Retirement Income Tax Rate First »

Potluck Dinners with a Side Dish of Funeral Planning 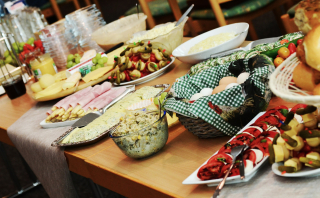 “Every month or so, 49-year-old Amy Pickard hosts a potluck gathering at her apartment. They've been described as death Tupperware parties,’ she explains.”

One-third of Americans over age 65 have wills, according to a survey published in the journal Health Affairs in 2017. Younger adults are even less likely to have prepared for their death.  However, one woman in California is taking the bull by the horns to help people get their affairs in order.

Amy Pickhard hosts potluck dinners at her apartment in Los Angeles. Guests are asked to bring food and beverages that remind them of a loved one who has passed. They begin with introductions, which is followed by reviewing a document she calls the “Good to Go” Departure File, that takes them through highly specific details of decisions.

It ranges from where they want their property to go to who should make decisions for them when they are incapacitated. These are not legal documents but a way to help clarify in a supportive setting what the participant’s wishes are.

However, some of the questions are thought provoking, such as those she refers to as the “sonic will.” Do you want the television on while you are waiting for family members to gather at your bedside? What songs do you want to be played on your deathbed, or at your funeral?

Pickard learned the necessity for this kind of planning the hard way, when her mother died unexpectedly several years ago. Pickard had to become a detective to locate the will and figure out what to do with her mother’s remains and assets. It took two years to settle the estate and then she was faced with her grandmother’s death followed by her father’s death. The experiences turned her into an evangelist for advanced planning. She began hosting the parties.

Not everyone is comfortable with this type of upbeat approach. In some cases, people respond the way they do because they believe making a will and estate plan means they will die. Pickard’s response? “Writing this stuff down, isn’t going to make you die!”

Reference: NPR Weekend Edition Saturday (May 26, 2018) “One Woman Helps Others Make Sure End-of-Life Planning is ‘Good to Go’”