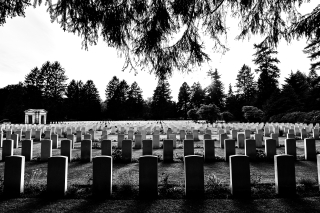 Two widows are fighting over the remains of a WWII veteran, since they both want him buried near them.

Paul Lewis Morigi fought for the U.S. during World War II. While in England, he met and fell in love with Olive Murphy.

The two got married in 1944.  However, the marriage did not last long.

They divorced when Olive decided she did not want to move to America with him. She feared she would miss her family too much.

Morigi went on to be a successful banker and a very wealthy man. He also got remarried to an American, Muriel Morigi. They were married for 40 years and had two children together.

At the age of 92, Paul Lewis Morigi divorced Muriel and moved to England, where he remarried Olive Murphy.

He recently passed away and now the two widows are fighting, according the Daily Mail in "Widows at war: British and American wives of war hero banker both want him buried in their own local cemetery - on opposite sides of the Atlantic - so they can visit his grave."

For now at least, the dispute between the two women does not appear to be over Morigi's assets but over where Morigi should be buried.

They both would like him buried close to them, so they can visit his grave easily. Of course, this could easily turn into a fight over his assets later.

It is not clear whether Morigi left any instructions for where and how he would like to be buried. However, it is clear that he probably should have done so.

Leaving instructions for your loved ones regarding your funeral and burial preferences can help alleviate these issues.

Reference: Daily Mail (Nov. 3, 2017) "Widows at war: British and American wives of war hero banker both want him buried in their own local cemetery - on opposite sides of the Atlantic - so they can visit his grave."